On request: This recipe is suitable for those who don´t want to spend more than half an hour in the kitchen, but also for those who like to take a little more trouble.
For each recipe I mention the extended version first and the easier one below. With each recipe you can decided for yourself whether you choose the homemade version or the fast one, they´re all exchangeable.

The recipe consists of three parts, bechamel, tomatosauce and the actual dish they´re meant for.
The basic recipe is vegetarian but I will mention some variations with meat as well.
I assume that you will use fresh lasagnesheets. If you use dried ones, follow the instructions for cooking them on the package.

Melt the margarine at low heat in a thick bottomed pan, be careful it won´t get too brown. Add the flour and stir quickly to get a smooth substance. Remove the pan from the fire, add a part of the milk an stir carefully to make sure there are no lumps left. Put the pan on the fire again, add the rest of the milk and stir until it starts boiling. Don´t let it boil any further. Add salt, pepper and the nutmeg.

Fast version:
i don´t know of anything faster than a ready for use package. 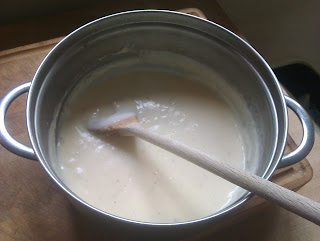 Homemade:
Peel the tomatoes by carving them a little and then immersing them in boiling water. Cut them into very small pieces and allow them to drip off as much of their juices as possible.
Heat the olive oil and fry the onion a few minutes until they´re lightly browned. Add the garlic and fry gently for a few seconds. Add the wine and let boil for about one minute. Lower the heat.
Add the tomatoes, the tomato paste if you like, the salt, pepper and oregano, let it boil and then let it simmer, on low heat, for about one hour. The liquids must be evaporated as much as possible.

Fast version:
Replace the tomatoes by a jar of peeled tomatoes or passata di pomodoro.
Replace the fresh oregano by dried oregano, in that case use only one spoon.
Or, when you really want to be fast: have a jar of ready made sauce.

Suggestions:
Add some mushrooms to the onion
If you don´t want the vegetarian sauce, fry some mincemeat (250 gr.), ham or bacon with the onion. 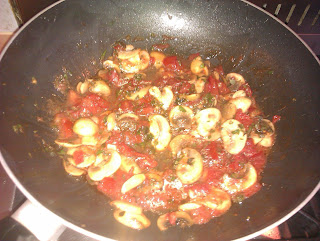 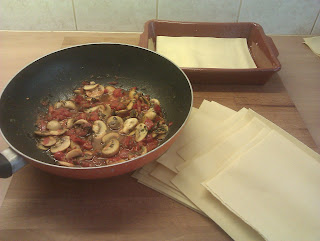 Cover it with a thicker layer of bechamel and cover it wih grated parmesan.
Fast version: have a sachet of grated cheese. 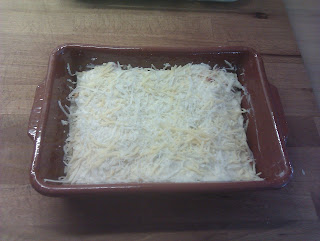 Cover the dish with aluminium foil and leave it in the middle of the oven for half an hour, until the cheese has melted.
Gepost door Unknown op 03:04