The second day of Christmas - ravioli stuffing and more

On day 1 I am going to prepare the ravioli, but as I have planned a mushroom broth on day 2, we´ll be very efficient and prepare two things at a time. NB I won´t give you a recipe for pasta dough for there are millions to be found. 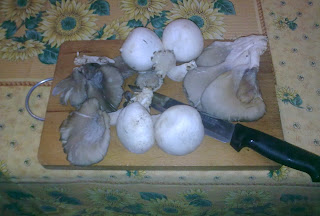 Soak the porcini in tepid water for half an hour and then squeeze them gently and dry them.
Don´t throw away the water, it will be used for the broth.
Clean the mushrooms with kitchen paper, remove the stems but don´t throw them away. Cut them into slices and pieces.
Divide the porcini and the mushrooms in two parts and put one part aside. 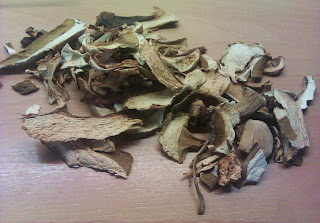 Chop the thyme and sage really small.
Fry the shallot in the olive oil at moderate fire until it´s soft. Add the mushrooms and the herbs and fry them until they´re slightly brown. Add the wine, make it boil and then lower the fire. Let evaporate all liquids completely. Remove the pan from the fire. Then add salt and pepper and the grated parmesan, mix well and let it cool down. 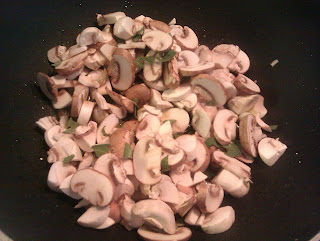 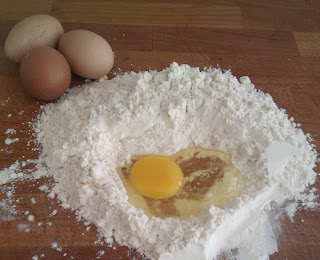 Prepare the pasta dough (you can find recipes everywhere) and make the ravioli by putting a small spoon of the filling on it, cover it and cut it into regular pieces. 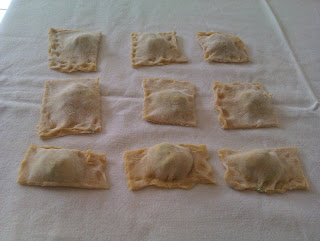 Mushroom broth, day 2:
1 carrot, chopped
1 onion or shallot, chopped
The second part of the mushrooms
2 shallots, chopped
1 garlic glove, pressed
Fresh twigs of rosemary, parsley, celery and the thyme and sage from the base
salt and pepper
olive oil 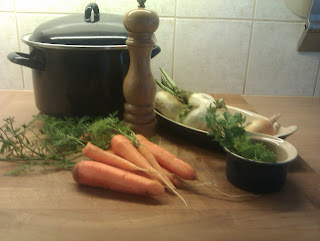 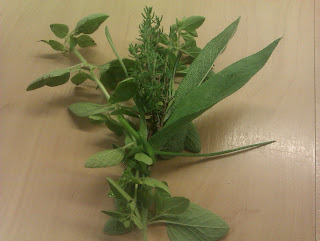 Use the stems you have put aside before. Make a bouquet garni from the other half of the thyme, sage, parsley, celery and rosemary. Put the stems, carrot, onion, the porcini water and the bouquet garni in a pan, add water (about 1 liter), salt and pepper. Make it boil, then lower the heat and let it simmer for at least half an hour. Pour the broth through a sieve.

Fry the onion and garlic in the olive oil at a moderate heat, until they´re light brown. Add the broth and make it boil again, the add the mushrooms. Lower the fire and let it cook for 10 more minutes.
You can add a broth cube, e.g. Porcini, but it´s not necessary.
Gepost door Unknown op 03:40