A `Secondo` that requiers a little more effort than my usual recipes, but I think it´s worth it. Besides, this time too I will give you an extended and an easy version, so I think you won´t exceed the `half an hour` limit you always ask me for. And of course, there´s a veggie version.

I made this dish once on the day before leaving for Umbria. After three weeks I returned and there was some typical, not really nice smell. I blamed the cats and cleaned the whole house, but the smell remained. I asked my friend who had taken care of the cats. He said he had been searching everywhere, for he thougth the cats might have brought in a dead bird or mouse or so, but without any result. The next day, I needed my oven.. I will not get into further details, but leaving the uncleaned griddle in the oven is not something I would advise.
Since that day, I use an ovenproof dish. 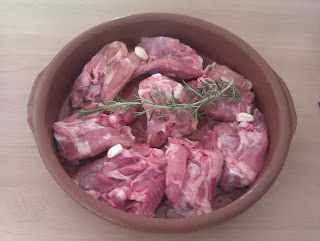 For the battuta and sauce:
2 spoons of EVO (extra virgin olive oil)
1 onion, chopped or: scroll down and read the easy version first.
1 carrot, chopped
1 stick of celery, chopped (and don´t throw away the eventual leafs, we will use them too)
2 tomatos, cut into pieces
4 spoons of tomato paste, or passata
salt, pepper
fresh parsley, chopped

Pre heat the oven at 200°C
Rinse the chicken legs with water and dry gently with kitchen paper, and season them with salt and pepper. Pour the olive oil in an ovenproof dish. Put the chicken into the dish, turn them once so they have a litlle olive oil all over. Peel the garlic gloves and make an incision, but keep them whole as they are. Put one glove on one chicken leg. Put the rosemary on top.
Cover with aluminium foil and put the dish in the middle of the oven for half an hour.
Then turn the chicken legs and leave again for half an hour.

In the mean time, prepare the battuta.
Heat the olive oil in a pan at moderate heat. Fry the onion, the carrot and the celery about 5 minutes until the are slightly colored and soft. Add the tomatos and let simmer for about 5 – 10 minutes (this depends on the quantity of fluid released from the tomatos, it must evaporate). Add the tomato past or passata. Season with salt, pepper, parsley and the chopped celery leafs. Let simmer for ca. 10 minutes at very low heat. 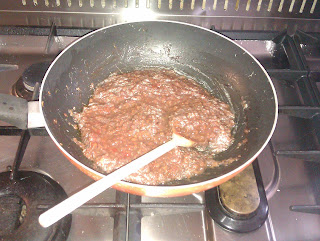 Easy version:
Get a ready-made tomatobased sauce. There are several sauces that are perfect for a dish like this.

When the chicken has been in the oven for about an hour, remove the foil, throw away the garlic and pour your sauce over the chicken. Make sure there´s sufficient liquid, if not, add a little water or white wine. Let simmer for another ten minutes. 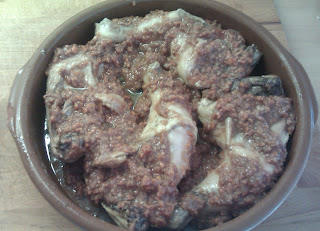 I normally serve the sauce with the pasta, and the chicken with ciabatta and some green salad, but if you want just one course, you could serve it with pasta like penne, fusilli or pipe rigate. 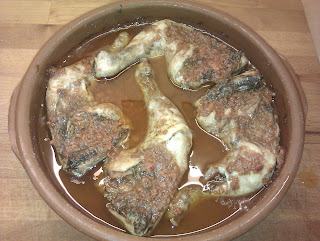 Vegetarian version:
You can easlily prepare a vegetarian dish with vegetarian schnitzels, burgers or whatver replacement you like.
In that case, prepare the battuta and the sauce first. Then put the burgers in an oiled dish, turn them after ten minutes, leave them for another ten, add the sauce and let go for another five minutes. There will be less liquid released, so maybe you have to add some water.

If you don´t like replacements you can use tofu. In that case, put a block of tofu in the oiled dish, add the sauce immediately. Cover with the aluminium foil, bake for ten minutes, then turn it, leave it for another ten mintes. Then remove the foil and leave it for 5 more minutes.
Gepost door Unknown op 03:26